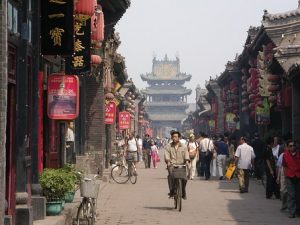 Pingyao is one of the best preserved city in northern China. In fact, it is possibly the only one to have preserved as a whole not only its original wall, but the structure of its neighborhood streets and houses which have maintained their traditional style.

Located in the not very visited Province of Shanxi, barely 100 kilometers away from Taiyuan, it was hardly known abroad until quite recently. This could be the reason why it got out of the first wild wave of tourist development that caused so much harm to other places with a valuable historical background. In Pingyao you can still see the typical layout of a traditional city in China. All streets are at right angles, running parallel to one of the four main streets which go from the centre of the city towards the four cardinal points.

The traditional constructions, with their courtyard in the middle, are amazingly well kept. Some of them still house the descendants of their builders, many centuries ago. Others have been renovated and beautified and turned into museums which specialize in showing the different aspects of ancient Pingyao.

Probably the most interesting museum is the Rishengchang Piaohao, the first bank in China which was founded in Pingyao in 1824. This bank soon extended to other parts of the country and even to neighboring countries. Soon other banks were established which turned the city into the financial centre of China. The museum explains how these financial institutions operated during the 19th century.

The whole city is a monument and wherever you go for a walk you will encounter building with a historical significance, most of them well preserved and open to the public, although sometimes with exorbitant entrance fees. The Drum Tower, the Yamen Palace, etc. Though none of them is able to steal the importance of the streets.

And talking about relics from the past, the best thing to do is to go to the outskirts and visit two amazingly beautiful temples.

Unfortunately, they are each in opposite directions, but if you make the effort to find a means of transport and you get to visit them, it will be more than worthwhile.