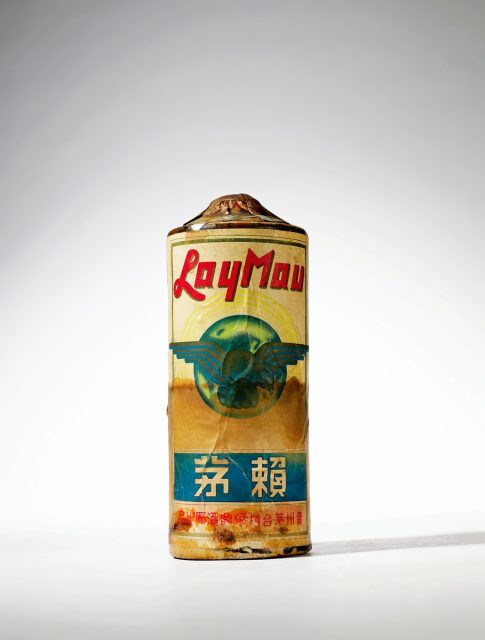 The bottle pictured is considered very rare as it bears the label of ‘Lay Mau’ which at the time was not part of Kweichow Moutai. It was not until 1953 that three separate distillers were merged by the Chinese government into one sate owned company that is know today as Kweichow Moutai.

Baijiu labelled ‘Lay Mau’ was exported to Hong Kong shortly after the founding of the peoples republic of China in 1949.

Vintage and rare baijiu in China is considered by many as a good investment that yields good returns and shows a strong appreciation in values for the right bottles. The baijiu investment market in China is estimated to be worth around RMB 5 billion to RMB 7 billion, and was projected to reach RMB 30 billion (US$4.48 billion) by 2020.

According to Xiling Yinshe, a Zhejiang-based Chinese auction house the top selling lots consisted of 100 bottles of Moutai made between 1983 and 1986, which was sold for RMB 3.335 million (US$498,000). The auction sold around 6,000 bottles of baijiu and generated RMB 84.88 million in sales.

Past notable prices for vintage baijiu include: