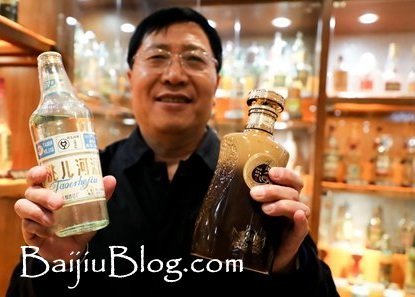 Since then Nings company has went from strength to strength with over 300 branches across China.

Nings entire baijiu collection is on permanent loan to the Jilin Culture Museum which he built in 2014.

Ning claims he will never sell his collection as he has invested too much time into researching his rare vintage bottles of baijiu. He has collected and classified almost all rare, vintage and commemorative worthy bottles of baijiu.

Nings collecting mania has lead to some family members entering the world of wine collecting, searching for rare vintage wines to appreciate as a family.

“Communication not only brings pleasure, but it deepens our friendship, we lose the true meaning of collecting if we keep our collection only to ourselves as a personal treasure,” said Ning, who is also the vice-president of the China National Association for Liquor and Spirits Circulation.

In the future he says he plans to organize events for collectors to gather and exchange information.

Chinese Woman Posts: Baijiu + Air Humidifier To Fend off Coronavirus
RONG TAI HE (RTH), The Original Maotai Baijiu
Kweichow Moutai Baijiu - VS - V.I.P Jiu 8 Baijiu
Clear and Simple Mixed Alcoholic Drinks With Baijiu
Antique Bottle Of Baijiu Found During A House Clearance
Corrupt Official Poured Moutai Baijiu Down the Drain to Destroy Evidence
Kweichow Moutai Best Baijiu Brand In The World - Or Is It?
Jiangxiaobai Baijiu - Has Political Tensions with China Halted Baijiu’s Popularity in India?
How To Make Baijiu! How Is Chinese Baijiu Made?
Cooking With Baijiu?