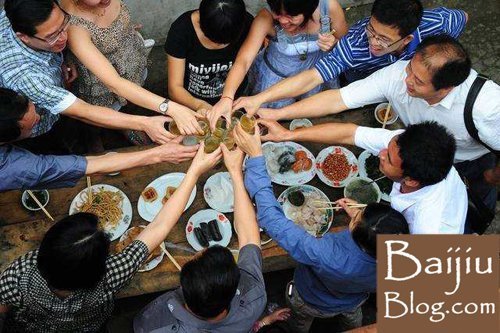 If you have been reading previous posts on the blog you will now be aware of baijiu, its health benefits, flavours and historical significance. But how does China’s national spirit drink fit in to the complex and very important pastime of drinking games?

Well, the Chinese have a number of fun activities up their sleeves in this department – and we will look at these in more detail a little later in this piece.

If you have ever taken part in any type of drinking game, whether as a student at University, a high flying executive at work, or just with friends at your local bar – you’ll know that these occasions are often messy, lawless, incredibly drunken and generally bad news if you’re not very good at winning things.

But did you know there is an international drinking game code? Yes folks, that’s right – no need to suffer those hangovers that seem to last for weeks, even months – just follow this set of rules, known, unofficially as ‘The International Drinking Rules’

So, there you have it readers. These are serious rules, as you can see. But that is just the beginning! Someone, somewhere, will always try and break these important rules – and this is where the world of forfeits then come into play. Below are examples of the kind of situations where breaking a rule results in a forfeit – and being a drinking game, these are, of course, are cumulative.

So, as you can imagine, these rules can make a regular drinking game complicated initially. However, after a few rounds you get the hang of things. Only when the alcohol begins to take effect do you witness truly catastrophic attempts to follow the rules. There is also, invariably, one very annoying player in every group who remembers (and thus rarely breaks) every rule whilst simultaneously watching all other players like a hawk. This player will be the one to dredge up the stupid things you did, while inebriated during the game, for years and years to come, with some regularity.

That’s a brief explanation about the general etiquette involved with pursuits involving alcohol and all the fallout that can entail. So how do the people of China go about their particular drinking games? Let’s examine what they get up to in Beijing and beyond.

Having discussed the ‘etiquette’ involved with drinking games, evidence suggests that the Chinese actually appear to dispense with many of the above rules, making for a brilliant party, full of unadulterated fun! They concentrate on the ‘forfeit’ element much more than their counterparts in the West.

Here’s a guide to the type of games the Chinese partake in. Whether its beer, or of course, Baijiu, there will be something for everyone here.

This is widely considered to be China’s favourite drinking game. The rules are pretty straight forward, however you need to be aware of the limitations with this one – the results could really hurt your head in the morning otherwise.

Each player has a cup that contains 5, six sided, dice. Everyone shakes their cup and notes what combination of matching dice are contained within, without the other players seeing. This is a giant game of bluff essentially, as each participant effectively bids on what dice they think is in each participants cup and states what is in their own.

This might not be the truthful hand that is actually within the cup, however. If you get caught out in a lie, you drink, or the player who incorrectly calls out a fellow player for lying must down some alcohol also.

For example, if you state that there are three 3’s in a cup, it is up to each player in the circle to increase the combination of dice numbers itself in each subsequent guess, say two 4’s or four 5’s, or other combinations greater than the initial bid that was made.

However, if someone has already said a certain number of fives are in a cup, you cannot then say another combination of fives, as they have already been spoken for. You can say two 6’s after someone has said four 5’s, but you cannot state 6 two’s. The amount of dots on each dice, must increase in each bid.

So the idea is that you push your luck, however when you believe someone has called an impossibly unlikely figure you can shout ‘Bu Xing’ , meaning ‘not possible’.

Everyone then shows their dice. Either the bluffer or incorrect challenger must drink, according to who is correct. If the bid is matched, or exceeded, the bidder wins, otherwise it is the participant who incorrectly challenges the call who has to drink.

This is another simple game, in theory. It is to do primarily with dares. The dealer counts from 1 to 13 as shuffled cards are placed on the table, face up, one at a time. If the number on the upturned card matches the number quoted by the dealer, every other player must slap the deck simultaneously.

The last player that slaps the deck must drink – and if everyone else chooses – must also accept a dare from the rest of the players. So it is definitely a game of reflexes and awareness.

Given that 1 to 13 are the range to count, the Jack counts as 11, the Queen as 12 and the King as 13. A fun game, but not good on the liver if you repeatedly slap the deck last!

This Chinese drinking game is steeped in tradition, though it is considered to be less popular than Dice, or Card Counting. The idea is that one player beats a gong repeatedly. The rest of the players pass a flower around in a circle. When the gong player stops suddenly, the person with the flower has to drink.

The modern day version of this game, might be very similar to the childhood game ‘pass the parcel’ – but a lot more adult and deadly in its outcome if you are unlucky enough to be holding the flower each time the gong stops.

The idea behind this Chinese drinking game, is again, fairly simple. Except once you have had a few drinks! This is for two players at a time. Both players extend their fingers revealing how many fingers they have out at the same time. Just before the reveal one player shouts a number between 2 and 20. If the total number is equal to the total fingers displayed, then the player is safe. If the number is not, then the player must drink.

Given the odds are pretty short to guess this right, there is a very good chance you will be reaching for a hangover cure in the morning.

Shi Wu is very similar to the finger guessing game, mentioned above, but the odds are much, much, better. This again involves two players, but they only have the option of holding either zero, five, or ten fingers. This means the player guessing has the chance to guess between zero, five, ten, fifteen, or twenty at the moment the reveal is made.

Again, if the number is not correct, the person guessing must drink.

To make this game even more fun why not try and use the Chinese numbers when you guess – Ling (Zero), Wu (Five), Shi (Ten), Shi Wu (Fifteen), or Er Shi (Twenty).

At first glance you might be forgiven there is a high risk of you being stung in this game, or that you have to wear a bee keepers outfit to partake in it. But fear not, its nothing like that. The idea is that each player says the phrase ‘two bees fly down to a flower and fly’. Once the phrase is said, two of the players then play the classic game of Rock, Paper and Scissors.

If you win, you pretend (pretend is a very important word here) to slap the other player three times. However, if you both guess the same symbol you must both pretend (well, perhaps if you’re in a relationship you might not) to kiss. If either of you gets this wrong however, you must both drink.

Technically Chinese Poker is not considered a drinking game, however with a few Baijiu’s involved, this really spices things up.

This rules of this game are considered to be less complicated than those of the widely played Poker game, ‘Texas Hold Em’ but the basic idea is the same.

So, what are the rules of Chinese Poker, you may ask?

Once you’ve set your hands, you compare each of your three hands with your opponents corresponding hands, with the best hand earning a point, and a bonus point being awarded for sweeping all three.

There are also bonus points awarded to making certain hands, starting with straights on bottom and pairs higher than sixes on top. These bonus points can make the game incredibly swingy, especially if one player “fouls” their hand – fails to create three hands that ascend in value from bottom to top.

In that case the player pays the sweep bonus plus any high hand bonuses. Depending on the agreed upon bonuses, hands can get up to thirty points or higher in some cases. So, you can be creative in your drinking forfeits to suit the rules of this game. If you are more familiar with poker than some of your counterparts, then you are more likely to be walking in a straight line at the end of the evening, so it’s one to definitely learn before you embark fully into something you might regret in the morning.

So, as you can see, there are a number of games the Chinese culture indulges in – and some are not for the faint hearted. If you fully engulf the Baijiu drinking culture and start to play these games with friends, we wish you luck, but, of course, drink responsibly as you do so. (See: Drinking Baijiu – Chinese Customs & Traditions)