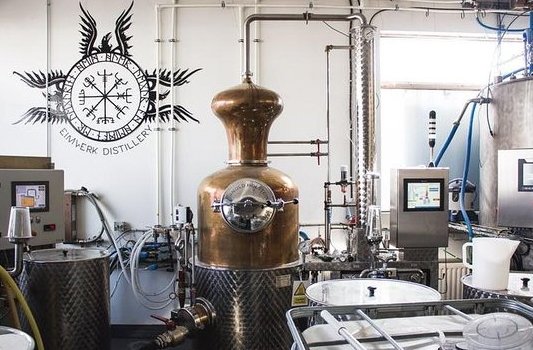 Baijiu is famously the national drink of China. While it is growing in popularity elsewhere, it’s a surprising location that has shown an interest in growing a new baijiu line. The Eimverk Distillery – based in Reykjavik, Iceland – has created two new baijiu brands.

It’s easy to identify these baijiu, as the Eimverk Distillery is not messing around with any confusing monikers. The first, simply named Red Label Baijiu, is the closer of the two to the traditional Chinese liquor. It’s created using mashed barley – all grown in Iceland, naturally – and triple-distilled in pots on a farm. The alcohol volume of this baijiu will be 53%, and the taste is described as barley-centric with grassy overtones and an aftertaste of spice.

The Eimverk Distillery’s second baijiu is simply known as Blue Label, and it’s created using similar techniques. This taste experience promises to be more Icelandic than Chinese in nature, though. Local herbs and caraway seeds have been added to the mix, creating a taste reminiscent of Brennivín – a schnapps beverage that is to Iceland what baijiu is to China.

Both of these baijiu labels are at a very early stage of development. So much so, in fact, that the distilleries own website is yet to list the products. Do keep an eye open, though. Surely a wide variety of different baijiu recipes from all over the globe can only be considered a good thing?