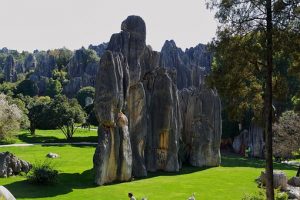 Kungming is the capital city of the Province of Yunnan where natural, historical and ethnic contrasts are clearly felt. Kunming, also known as the “City of Spring”, though situated in the tropic has got a very pleasant temperature all year round. This is due to the fact it is 2,000 metres above sea level surrounded by mountains.

Founded 2,000 years ago during the Han Dynasty, it became a secondary capital city of the Nanzhao Kingdom in the 7th century. In 1274 it was renamed Yunnanfu and remained so until mid-20th century. It was actually at the beginning of the 20th century when due to the pressures coming from the European powers Kunming paved the way to international trade.

Cuihu Park is without a doubt the most charming spot in Kunming. It has several islets and pavilions. The cafés beneath the weeping willows, which flank the islets, are an ideal place to relax surrounded by a peaceful atmosphere. Yuantong Temple is next to the Park. The most important Buddhist temple in Kunming, both for its size and antiquity, was founded more than 1,000 years ago and is still an important pilgrimage centre today. It is to be pointed out the beautiful statue of Sakyamuni given as a present by the King of Thailand.

Western Hills: 20 kilometers away from Kunming there are some fantastic views of the city and Dian Lake from there. According to local legends they were considered to be the most suitable spot to place the gods being this the reason why so many temples have been built there over the centuries. Among these temples we point out the Huating and Taihua Temples and, above all, the famous Dragon Gate with its tunnels and grotto’s dug through the stone wall by Taoist monks between 1781 and 1835. Apart from the main pavilions there are other temples and minor shrines disseminated among the mountains.

The Stone Forest is without a doubt Kunming’s key tourist attraction. It is in Lunan district, 90 kilometers away from the city and inhabited for over centuries by the Sani branch of the Yi people, a minority group not recognized by the Chinese Government up to date. It is a spectacular site: a maze of grey pinnacles and peaks of limestone that in some cases are 30 meters high. There has been an attempt to integrate scenery and nature in the Stone Forest and visitors get big portions of this motto. Young people in immaculate Sani dress court each other among the rocks, play around the waterfalls, sing love songs in the meadows or chase each other in an affectionate manner in the forest.