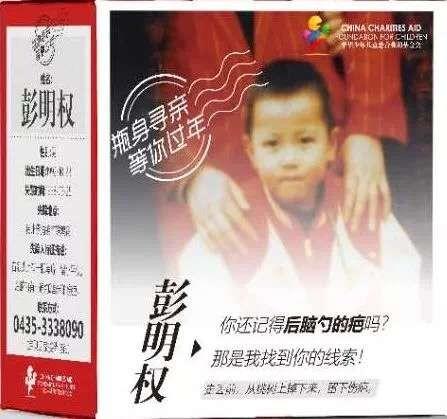 With a turnover of roughly £18 million per year, Laoyuanzi baijiu is clearly making its way into a substantial number of homes. This, in turn, means that plenty of eyes will be on these missing children. Surely this means that some good can come from a deeply unpleasant situation?

Like any major nation, China experiences a number of missing child cases each year. Thankfully, many are found and returned to their families through the Ministry of Public Security, and their Reunion platform. Reunion reaches far and wide to any number of service providers throughout China, from taxi services to tracking payments, and has had a huge impact. Adding names and faces to baijiu bottles will surely only magnify this awareness.

A consumer that picks up a bottle from Laoyuanzi’s special line will be confronted with a photo, description and name of the child that is missing. In addition, contact numbers will also be provided so that anonymous information can be shared.

A 120ml bottle of this baijiu translates at around £2.25, so it’s hardly a substantial investment to potentially save a life. Once shipping and tax costs have been factored into the expense, Laoyuanzi also claim no profits. Instead, these are donated in their entirety to the China Charities Aid Foundation for Children.

Obviously, the initiative was not forged without controversy. Xiao explained that he was met with resistance from his staff team when he first pitched his idea, as concerns about privacy reared their heads. After all, Laoyuanzi are now working in conjunction with a volunteer organisation named Baobei Huijia (loosely translated, “little one come home”) to gain access to data concerning over a thousand missing children. Each of these subjects had their data allocated to the Ministry of Public Security by concerned parents.

Overall, however, Xiao ruled that this initiative was the right thing to do and stuck to his guns. He’s also hoping that the idea does not begin and end with Laoyuanzi, as Xiao hopes that other baijiu manufacturers will follow his lead.

This is a view echoed by at least one mother of a missing child, too. “I’ve been looking for over 20 years, and I’ll keep doing so for as long as I can breathe.” said the parent in question. With her child’s data now broadcast on the side of a baijiu bottle for the world to see, perhaps hope can once again be reignited.

Sales of these specialist bottles have already begun, and are expected to number around 115,000 altogether. With the Chinese New Year rapidly approaching, this could lead to a number of delighted families being reunited in time for the holidays. Don’t expect this to be a one-and-deal promotion, either. Laoyuanzi have announced plans to make this an ongoing promotion.

They say that answers never lie at the bottom of a bottle, but in the case of missing children, they may just be found on the side. We can only hope that is the case, and the purchase of bottled baijiu reconnects as many families as possible.